Though the dust around COVID-19 is settling, the elderly are still grappling with the new norm, according to Dr. Vina Doshi, a consultant specialist in Geriatic Medicine at Farrer Park Medical Centre. In this article, Dr. Doshi shares how the pandemic has upended their normal routines and impacted their physical and mental health.

Since the outbreak in December 2019, there have been numerous data and news reports that showed how the elderly people are at a higher risk of dying due to COVID-19. Besides keeping up the vigilance to avoid getting infected, the elderly now have to wrestle with other aspect of personal health and wellbeing as a result of the pandemic.

While wearing a mask may seem like a simple and easy enough task, many people, including the elderly, have issues with remembering to wear them in the first place. “When a mask is worn, there are issues with keeping it in place. Masks which do not fit well will cause air leaks and the most common issue is the fogging of the spectacles which in turn could be potentially dangerous for the elderly; especially if their spectacles fog up while they are crossing a road or going down the stairs,” Dr. Doshi said.

When adjusting the mask, it should be done with sanitized hands and one should avoid touching the face. “Most of the elderly will not remember to sanitize or wash their hands before readjusting the mask, hence risking contamination,” she added.

Keeping a safe distance from each other can also be an issue. Many of the instances seen in the media whereby some citizens refused to abide by safe distancing rules were older people. “The elderly may be confused by the sudden change in habits and the interruption of their normal routine. They may not recognize the necessity and importance of following preventive measures,” Dr. Doshi explained.

“Furthermore, some of the elderly may actually be suffering from dementia. The measures, while basic, can be overwhelming for them, leading to confusion and restlessness. Hence communicating information about keeping a safe distance to them can be difficult as they are not able to comprehend the need for such instructions,” she added.

Dr. Doshi further shared that the measure of staying away from the elderly if they are unwell may be an issue in this population. Many are either caregivers to their disabled spouse or are being cared for by domestic helpers and other family members.

“If the caregiver becomes ill, it may be difficult to keep away from the elderly care recipient as there may be no one to take over. During the circuit breaker, things were even more difficult as foreign domestic workers were not allowed into the country at all. Even now there are many restrictions in place and this is causing issues with homebased care,” she said.

“We have seen a wave of physical and cognitive deconditioning post circuit breaker period, and for some, the effects are devastating,” said Dr. Doshi. “I have seen several patients who were able to function independently in February but in June, they presented with falls and difficulty standing up. It is quite alarming to see how fast an older adult’s condition can deteriorate in this situation.”

“Physical deconditioning increases susceptibility to injury falls at home such as hip fractures and cuts. These incidents can impair their mobility and result in them not being able to look after themselves,” she added.

Being weak and in pain due to injury and as a consequence, becoming less mobile, could lead to conditions such as anxiety and depression or even the feeling of uselessness. The situation is further exacerbated with uptrends of family size getting smaller with older persons living on their own or with an equally elderly spouse.

The elderly may also go on to develop isolation issues. “The current generation of older persons worked all their lives and many do not have hobbies. Once they are stuck in the house and cut off from their families and circle of friends, there is usually a big void in their lives that they would struggle to fill,” Dr. Doshi said.

“We are also seeing more elderly who are foreigners but are stuck in Singapore either because their children prefer them here or that they are not able to go back (home) due to border restrictions. Many of these elderly have had their “status quo” taken away and this means not having their friends and usual support systems; they can be potentially completely lost,” she further added.

Thankfully, there have been various home based services such as home help services that were allowed to resume. Such services effectively help to reduce isolation.

Learning to live with Virtual Consultation

While in-person clinic visits are normalizing, telecare and telemedicine are being encouraged. “COVID-19 and the circuit breaker have really forced many of us into an exponential IT learning curve. Consulting on the virtual platform requires a different level of skills and it is also very dependent on network connectivity,” Dr. Doshi highlighted.

She explained that lighting and the quality of the camera are crucial especially if required to make diagnoses on certain conditions such as skin rashes and jaundice.

“Although it is not the same as a face to face consultation, it did provide some sort of confidence on both parties that the treatment given then was based on some sort of clinical assessment,” she added.

On impact to the elderly, Dr. Doshi said that telemedicine is a different challenge altogether. “Sometimes they do not know where to look, some have looked at the screen and said ‘Are you sure that’s the doctor?’ Many were and still are not comfortable nor confident with this mode of consultation,” Dr. Doshi shared.

As we progress towards our new norm, we have to pay special attention to out older citizens and help to ease them along this path as there is no choice but to accept and become comfortable with this new IT based consultation. 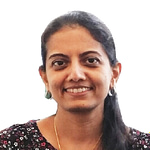 Dr. Vina Doshi is a consultant physician and specialist with a rich experience in caring for the elderly. She obtained her MBBS from the University of Leeds in 1995. Dr. Doshi then spent a further year in Leeds completing her Internship and returned in late 1996 to continue with her medical career in Singapore. She attained the MRCP (UK) qualification in 2001 and obtained her Specialist qualification in Geriatric Medicine in 2004. She was previously Consultant Geriatrician and Director of the Geriatric Day Hospital and Geriatric Centre in Changi General Hospital where she dedicated 9 years of service. She was also a member of the Patient Safety Committee and was the primary leading physician running the Falls Clinic in the hospital.

6 Ways Not To Overeat This Christmas

Is Flu Vaccination Useful Amidst the COVID-19 Pandemic?