In April 2014, there was reportedly an average of 200 dengue fever cases per week. At that time, this figure is considered higher than average. Since June 21, 2020, the weekly reported cases have been persistent at over 1000. Dengue virus serotype 2 (DENV2) was previously the predominant serotype, but DENV3 has recently emerged in Singapore again after almost three decades. It raises the risk because the majority today has a lower immunity to DENV3 and are consequently, prone to DENV3 infection.

“All the four dengue serotypes produce the same illness and symptoms such as fever, muscle aches, headaches, reddish rash and sometimes bruising and bleeding in the skin, vomiting, diarrhea, swollen hands and feet,” Dr. Wong explained.

The normal range of platelet count is between 140 – 440 X 109/L.  In dengue infection, the platelet count can drop to lower levels and the patient can start bleeding from various sites such as the nose, gums, skin and stomach.

“The concern about DENV3 is that it has ‘re-emerged’ in Singapore after almost three decades. It can result in a massive outbreak as most of the population have not been exposed to DENV3 and can fall ill with this infection,” added Dr. Wong.

Dr. Wong clarified that even after one episode of dengue infection, you do not get full protective immunity against all four strains.

“After dengue infection with a particular serotype, for instance, DENV2, you typically have long-lasting immunity against the strain. However, you can be infected with another serotype such as DENV3,” Dr. Wong explained.

With four strains of dengue, it means it is possible to have dengue infection four times in a lifetime. Hence with the re-emergence of DENV3, being re-infected by the dengue virus is consequently high, resulting in a surge in the number of recorded cases.

Infection is caused by a bite from an infected Aedes mosquito, which is the vector for transmission of dengue. The incubation period is three to seven days.

When asked what caused the DENV3 strain to resurface, Dr. Wong explained that the dengue serotypes move in cycles of 2-4 years. After one serotype has predominated for several years, and the population develops widespread immunity to this serotype, another serotype will typically “take over”.

There is no specific treatment for dengue. Instead, the treatments are all supportive and symptomatic. For instance, patients would be treated for their fever, nausea, diarrhea, or platelet transfusion if the platelet count is low. Some patients may require intravenous hydration.

According to Dr. Wong, there is a dengue vaccine registered in Singapore and several other countries, but it is not considered “highly effective”.

“There is still ongoing research on making better and more effective dengue vaccines. Our response to dengue remains as vector control. What all of us can do is to help control the mosquito population by preventing mosquito breeding,” he advised. 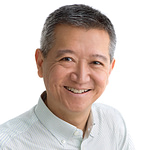 Prior to private practice, he was Head, Department of Infectious Diseases at Tan Tock Seng Hospital and Clinical Director, Communicable Disease Centre, the predecessor of the National Centre of Infectious Diseases. He continues to serve as a visiting consultant at Singapore General Hospital (SGH) and Sengkang General Hospital. Dr. Wong served two terms as an elected member of the Singapore Medical Council until November 2012 and sits on various committees at the Ministry of Health and restructured hospitals.

Easing Back Into Exercising: What You Need To Know

Interventional Cardiologist Dr. Julian Tan walks us through myocarditis, the inflammation of the heart muscle, and shares the possible health effects the COVID-19 vaccines can have on the heart.
July 23, 2021
Read More

In this article, we ask Consultant Respiratory Physician and Intensivist Dr. Alvin Ng Choon Yong for insights on the health risks of vaping.
July 22, 2021
Read More

In this article, we speak to Consultant Colorectal Surgeon Dr. Charles Tsang to learn more about the importance of treating colorectal cancer at an optimal time and the medical advancements available upon diagnosis.
June 30, 2021
Read More