Breast cancer is the leading cause of morbidity and mortality among women in Singapore. The incidence of breast cancer in younger women below the age of 50 years old continues to climb over the past 10 years.

Breast cancer accounts for 28 percent of cancer in women and represent some 2,000 new patients per year in Singapore alone. In addition, there are some 500 patients who will die of breast cancer every year. And 40 percent are diagnosed under the age of 50 years old.

As there is a significant risk of being diagnosed with breast cancer closer to age of 40-50 years old, adopting the recommended mammogram screening thus becomes very important. According to Dr. Choo, there is an improvement in the odds of surviving breast cancer is if it is detected at an earlier stage. The misconception of breast cancer only affects the post-menopausal woman can create a false sense of security.

“Don’t assume that breast cancer won’t happen to me. The fact is 1 in every 14 woman in Singapore will get breast cancer and it is the most common of cancers for women in Singapore. The long term survival can drop from 90 percent in Stage One to 60 to 70 percent in Stage Three and under 10 percent in Stage Four. Very early detection of cancer means that you may be able to avoid chemotherapy and sometimes only combination of surgery, radiation or hormonal treatments are needed. Mammograms are affordable and deductible through Medisave. It can also be done every two years. But less than 50 percent of the population undergo a mammogram.”

He added that the statistics for women taking mammograms need to be much higher in order for a real chance to bring the number diagnosed at a later stage down.

Take the Guesswork Out

Dr. Choo mentioned that over the last decade, there are many more avenues for screening mammogram.

“For example, there is a mobile mammogram vehicle (Mammobus) that goes around Singapore. Medisave and other payment options can alleviate the worry on high costs. Mammograms can also be done via the Breast Screen Singapore program at polyclinics and at restructured or private hospitals,” he shared.

He elaborated: “If you are between the ages of 40 to 50, the recommended mammogram is once a year and every two years from the age 51 to 80 years old.”

Besides screening, women are advised to routinely examine their breasts once a month for any breast lumps besides undergoing a yearly health screening.

There are multiple possible causes of breast cancer such as being overweight and the prolonged use of hormone replacement treatment. Inheritable genetic cause such as the BRCA1 and BRCA2 represents about 10 percent of causes of breast cancer. But, there are many cases where no attributable causes are found. As such detecting cancer at an earlier stage becomes an important aspect not only in improvement of survival but also reduces the need for aggressive treatments.

“For Stage One, it may not be necessary to undergo chemotherapy and only surgery for example, a lumpectomy, is needed. If the lump is removed and not the whole breast, then radiotherapy will be needed to reduce risk of recurrence. With this approach, there is a 90 percent chance of a cure. Some cancers are diagnosed even before Stage One with mammogram and the cure rate is 95 percent. For Stage Two to Three, chemotherapy is usually needed in addition to surgery and radiotherapy. The cure rate ranges from 60 to 80 percent,” he said.

Dr. Choo also highlighted that if breast cancer is diagnosed at a later stage, there is still hope though.

“For Stage Four cancers when it has spread and there is no cure, the aim is to prolong life. Life expectancy can still be a few years as we have better treatments now. The message is to get diagnosed early so that the chance of cure is high and chemotherapy can sometimes be avoided and there is no need to undergo a mastectomy in early stage cancer,” he adds.

Each year, over 1,000 women are diagnosed with breast cancer, and over 400 die from the disease, according to the Singapore Cancer Society.

According to Dr. Choo, breast cancer may not always be felt. When any breast lumps are felt, it is important to seek medical attention early. Not all breast lumps are cancerous and benign breast lumps such as cysts, fibroadenoma and other fibrocystic disease are also common.

“The uptake of screening mammograms to detect pre-invasive cancer or early Stage. Breast cancer lumps are usually not painful and best picked up by mammogram when it still too small to be felt by hand. So it makes sense to take a mammogram on the recommended time period,” he says.

As a parting note, Dr. Choo encourages, “Thankfully, treatments for breast cancer today have improved greatly and patients are living three times longer as compared to 40 years ago. If you discover a breast lump, please seek medical attention early. Cancer is treatable and curable at an early stage.” 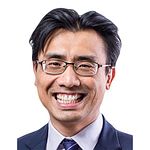 Dr. Choo Bok Ai is a Senior Radiation Oncologist with years of experience in caring for patients with cancer. He practices at Icon SOC clinic at Farrer Park Medical Centre. Dr. Choo graduated from the University of Aberdeen, UK in 1998 and went on to obtain his postgraduate internal medicine training qualification from the London Royal College of Physicians in 2002. He completed his clinical oncology specialist training in 2007 in Birmingham, UK, and is a Fellow of the UK Royal College of Radiologists. He joined the Academy of Medicine Singapore as a Fellow in 2013 and is currently the Vice Chairman of the Chapter of Radiation Oncology. Dr. Choo was the 2011 treasurer of the Singapore Society of Oncology and an Assistant Professor in Medicine at the Yong Loo Lin School of Medicine, National University of Singapore, from 2011-2018. His wide ranging practice includes advanced radiation therapy technologies, precision medicine and the treatment of breast, gynecological, head and neck, skin and sarcoma cancers.

Prostate Health: High Fat Diet – What are the Risks?