Colorectal cancer is the most common cancer in Singapore yet one of the most detectable and preventable cancers. It also tends to be diagnosed in its later stages. About one-third of cases are diagnosed at stage three and another one-quarter at stage four, for both males and females according to Health Promotion Board1.

In this article, we speak to Consultant Colorectal Surgeon Dr. Charles Tsang to learn more about the importance of treating colorectal cancer at an optimal time and the medical advancements available upon diagnosis.

Colorectal cancer is a type of cancer that begins in the large intestine (colon). The colon is the final part of the digestive tract. It typically affects older adults, though it can happen at any age. It usually begins as small, noncancerous (benign) clumps of cells called polyps that form on the inside of the colon. Over time some of these polyps can become colon cancers.

In more advanced colorectal cancer cases where the tumor is large, causing blockage or invading into surrounding organs, minimally invasive methods cannot be used. In this scenario, open surgery would be required to treat the disease.

According to Dr. Tsang, surgical margin are important in colorectal cancer surgery. When asked about the cases that Dr. Tsang has encountered, he spoke about some of the challenging cases he has dealt with and the importance of optimal timing in treating colorectal cancer.

“I had a 33-year-old patient who was 9 weeks pregnant. She first presented with worsening right back pain for over two months. Upon MRI, a large ulcerative tumor mass in the retroperitoneal space (where the kidneys, adrenal glands, pancreas, nerve roots and lymph nodes are) was found. It was a challenge as removing the tumor means the patient has to sacrifice her baby. The patient agreed on chemotherapy and upon delivering her 29-weeks-old baby, she proceeded with her resection surgery,” shared Dr. Tsang.

According to Dr .Tsang, colorectal cancer in pregnant women can be optimized with neoadjuvant chemotherapy (the use of chemotherapy to reduce a tumor’s size prior to the main treatment course with low risk to the mother and baby.

When the Cancer Advances

Furthermore, Dr. Tsang went on to share with us another challenging case he experienced.

“I had a patient who was 50-year-old, diagnosed with rectal cancer which has spread to the liver. At this juncture, he underwent pre-operative chemotherapy which resulted in improvements in both rectum and liver. Upon post-chemotherapy, the patient underwent liver resection followed by more chemotherapy. Despite the good response, the patient was found with a tumor nodule on his right lung upon surveillance scans. Surgery was performed on the lung laparoscopically to remove the tumor nodule” shared Dr. Tsang.

Dr. Tsang highlighted that metastatic cancer can be managed with carefully timed chemotherapy, radiation therapy and surgery of the primary tumor.

A Time for Everything

“Modern treatment of colorectal cancer nowadays involves a team of experts of not just surgeons but including oncologists and radiation therapists and there is a timing for everything” Dr.Tsang revealed.

With Singapore having a total of 11,238 cases of colon cancer cases from 2014-2018 with both men and women equally at risk according to the Singapore Cancer Society2, it is important for regular screening to avoid late detection of colon cancer.

The Importance of Screening and Early Detection

Colorectal cancer is a disease that is highly treatable and preventable with early detection. Adults aged 50 and above are recommended to go for annual screening.

Today, there are various screening procedures available to help in the detection of colorectal cancer. They are: colonoscopy, virtual (CT) colonoscopy, double contrast barium enema and fecal occult blood test. Through screening, precancerous polyps—abnormal growths in the colon or rectum— can also be detected and identified, allowing surgeons to remove them before they turn into cancer.

The early stages of colorectal cancer usually present no symptoms. They start to appear only as the cancer progresses. Safeguard your health. Get tested, change your lifestyle and be informed.

If you require medical attention, visit our 24HR Emergency Clinic or call us at 6705 2999. For more on prostate health, send us an enquiry here. 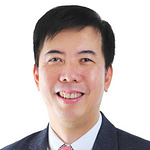 Dr. Charles Tsang is a consultant colorectal surgeon who is well versed in laparoscopic and robotic surgery for both cancer and benign disorders, proctology, advanced therapeutic endoscopic and functional bowel disorders. He is a recognized world authority in endorectal and endoanal ultrasound imaging. He was Head and Senior Consultant of the Division of Colorectal Surgery and Surgical Oncology while at National University Cancer Institute of Singapore prior to private practice, and continues to be a visiting consultant at Singapore General Hospital and Ng Teng Fong Hospital.