While diet and lifestyle are common tips to stay heart-healthy, there is also the psychosocial aspect of cardiovascular disease (CVD) that is less discussed. We asked Dr. Bernard Kwok, our cardiologist, to give another perspective of CVD and how staying happy and positive could do wonders for the heart.

Minding the Heart with Heart

The INTERHEART study1 identified psychosocial factors of depression and social isolation as CVD risk factors after smoking and cholesterol. The latter is often linked to lifestyle and diet issues, and in the cases of cholesterol, could be genetic.

“In the study some years ago, they found nine factors which explain 90% of heart attack cases. And one of them is stress and depression, which does increase the chance of heart attack,” said Dr. Kwok.

“The others are quite well known to us. They are gender, hypertension, diabetes, abdominal obesity, and physical inactivity,” he added.

While encouraging CVD patients to mind their health status with vigilance, the other challenge Dr. Kwok highlighted is managing their mental health.

“As long as anyone stays away from crowded places, it will minimize their chances of catching the COVID-19 infection. The bigger challenge is then to remain positive, try not to be stressed and to avoid depression; which is a major part of the battle won,” he added.

“We don’t know exactly why, but there’s this association that’s quite clear from the study. It is important to go outside for a walk. Choose a time that is less crowded, go somewhere quiet and get some fresh air, some sunshine. Just being outdoors can improve how a person feels,” Dr. Kwok advised.

Most cardiovascular disease happens in men. It is a gender effect. The most straightforward explanation, according to Dr. Kwok is that premenopausal women has female hormones that protect the heart to a certain extent.

“It has been estimated that women’s risks of CVD catches up with a man five years after menopause. So most premenopausal women are protected from heart disease,” he explained.

The other non-modifiable factor is ethnicity.

“In Singapore, among the three major ethnic groups, the Indians have the highest risk of heart disease followed by the Malays and then the Chinese,” he said.

There are certainly genetic factors at play as well. Though family members may have developed heart attack or blockages in the heart arteries, the specific genes may not have identified.

“Then you should try to take as much care as possible to manage the risk factors. Avoid smoking, stay active and control your blood pressure. If you have diabetes, keep your condition managed and most importantly, lower the the cholesterol as much as possible,” Dr. Kwok advised. 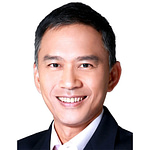 Dr. Bernard Kwok obtained his basic medical degree from the National University of Singapore (NUS) in 1990. He further qualified in internal medicine with Master of Medicine from NUS. He became a Member of the Royal College of Physicians (U.K.), after qualifying with a diploma from the Royal College of Surgeons of Edinburgh. He trained in cardiology at the National University Hospital in Singapore, and completed a fellowship in Heart Failure & Heart Transplantation at Stanford University School of Medicine in the U.S. Dr. Kwok is Singapore’s first qualified transplant cardiologist.

My Prostate is Enlarged, What’s Next?