For decades, biopsy analysis has involved invasive and costly surgery, or core biopsy (a procedure where a needle is passed through the skin to take a sample of tissue from a mass or lump) in retrieving tissue from the tumor.

It is an essential procedure for patients with cancer, as it provides crucial information on diagnosis, prognosis, and prediction of response or resistance to treatment. With the advancement of targeted therapy that requires biomarkers testing, laboratories now require more tissue for analysis.

Often, the initial biopsy material may not be enough for all the required tests. As such, there is a need for an improved biopsy method that collects adequate sample amounts that are also amenable to frequent testing.

One such method is blood-based liquid biopsy, as it is non-invasive and can complement the traditional techniques should a patient be too unwell to undergo traditional surgical biopsy, or should a tumour be inaccessible.

Advances in liquid biopsy have occurred over the past several years due to the sequencing of the human genome. These technological advancements have made it possible for scientists to detect genetic mutations of cancer.

Tumors release a variety of biomolecules into the bloodstream that can be collected via a blood test. To demonstrate unique cancer gene mutations detected from fragments of cell-free DNA or RNA in a patient’s blood, circulating tumor DNA and intact circulating tumor cells are targeted during a liquid biopsy.

Next-generation-sequencing (NGS) or polymerase chain reaction (PCR)-based methods such as digital-PCR are then used to detect biomolecules. NGS-based methods provide a comprehensive view of a cancer’s genetic makeup, and are particularly useful in diagnosis, while digital-PCR offers a more targeted approach to detect minimal residual diseases for monitoring treatment response and disease progression.

In August 2020, the US Food and Drug Administration (FDA) approved several liquid biopsies such as the Guardant360 CDx test to detect the DNA of several cancer gene mutations.

Liquid biopsy has become the focus of future research on precision diagnosis and treatment of cancers.

However, there are challenges to the widespread use of this new approach, and there is still a place for tissue biopsies. Far from being redundant, taking and testing tissue samples remains the gold standard. 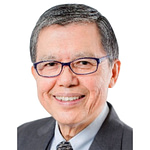 Dr. Tan Yew Oo is a medical oncology specialist and is part of the Icon SOC Farrer Park Medical Clinic group of medical oncologists. After completing his Bachelor of Medicine and Bachelor of Surgery (MBBS) from the National University of Singapore in 1971, he went to the United States for his residency in Internal Medicine and fellowship in Hematology​, and later continued his fellowship in Medical Oncology in Canada. He was certified as Diplomate of the American Board of Internal Medicine, Hematology​ and Medical Oncology and holds specialist certification from the Royal of College of Physicians and Surgeons of Canada in Internal Medicine and Hematology. Being the first medical oncologist in Singapore, Dr. Tan had helped set up the specialty at Singapore General Hospital (SGH) and NUH. He also held many positions in the NUS, Ministry of Health and professional bodies during his tenure with the university.

Anxiety: Is it Normal and When Should I Seek Help?